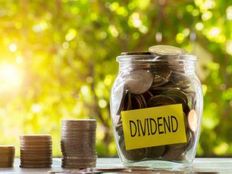 Where to Find Some Safety With Dividends in 2020

By some estimates, S&P 500 dividends could contract 20% or 25% this year and under some ominous scenarios, the most fragile industries could slash payouts to zero.

That’s one way of saying equity income investors need to focus on sectors with the potential to sustain and grow payouts even against turbulent backdrops. Technology and the ProShares S&P Technology Dividend Aristocrats ETF (TDV A) help with that objective.

TDV, which debuted last November, follows the S&P Technology Dividend Aristocrats, which requires member firms to have payout increase streaks of at least seven years. Its 34 holdings are equally weighted, a strategy that helps reduce single-stock risk, but the fund is nonetheless exposed to some tech dividend payers with attractive traits.

There are 11 S&P 500 sectors, but just three – technology, financials, and industrials – are expected to grow dividends in the second quarter relative to the first three months of the year, according to Bloomberg dividend forecasts.

“Of course, not all companies are ill-positioned. Some are even expected to continue to increase dividends, such as International Business Machines Corp., Johnson & Johnson, and Apple Inc.,” according to Bloomberg. “IBM, in particular, is seen boosting its payout by 7 cents a share to $1.69. That would be the 25th consecutive year of increases, making it eligible for inclusion in the S&P 500 Dividend Aristocrat Index.”

If IBM hits that milestone, it would qualify for entry into the ProShares S&P 500 Aristocrats ETF (NOBL A-), which tracks the S&P 500 Dividend Aristocrats Index. The Dow component is a member of TDV and Apple is a recent addition to the tech dividend ETF.

Adding to the thesis for TDV are the cash positions of technology companies. In a note out Thursday, Credit Suisse the 10 S&P 500 companies with the best cash positions. Three – Apple, Oracle, and Microsoft – are TDV components. TDV has a 30-day SEC yield of 1.51%.

It appears advisors and investors are awakening to the TDV story and are doing so at just the right time. The ProShares fund recently took home the 2019 People’s Choice prize at the prestigious ETF.com awards.