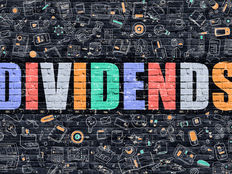 Where to Head for Dependable Dividends

Broadly speaking, dividends under duress this year with the S&P 500 home to an unfortunately steady stream of negative dividend action. All that bad news is highlighting opportunity with the technology sector and the ProShares S&P Technology Dividend Aristocrats ETF (TDV A).

TDV, which debuted last November, follows the S&P Technology Dividend Aristocrats, which requires member firms to have payout increase streaks of at least seven years. Its 34 holdings are equally weighted, a strategy that helps reduce single-stock risk, but the fund is nonetheless exposed to some tech dividend payers with attractive traits.

As just two examples of the strength in tech dividends Dow components Apple (AAPL) and International Business Machines (IBM) recently boosted payouts. In fact, IBM’s dividend increase streak is now out 25 years, qualifying it for admission, at some point, to TDV’s stablemate, the ProShares S&P 500 Aristocrats ETF (NOBL A-).

To this point in 2020, Western Digital (WDC) is the only technology company to announce a dividend cut or suspension. Still, investors should monitor cash flow situations among dividend payers, tech names included, for clues about the near-term viability of those payouts.

“Meanwhile, Hewlett Packard Enterprise (HPE) allocated about 35% of its free cash flow to its dividend in its most recent fiscal year, and Cisco Systems (CSCO) was at about 40%, according to Evercore ISI,” reports Lawrence Strauss for Barron’s.

TDV components are equally weighted, a methodology that reduces single-stock risk and can buffer investors against potential negative payout news among the fund’s components.

Technology companies historically did not pay out dividends since it would hint that the firm didn’t have anything new to reinvest in to further support their breakneck growth. While this growth-oriented model has worked over the years, the market environment has shifted.

Among other TDV components that are likely to boost dividends this year Dow components Cisco Systems (NASDAQ: CSCO) and Microsoft (MSFT).