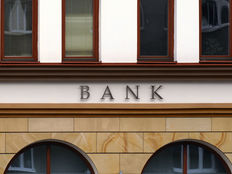 While interest rates were boosted four times in 2018 by the Federal Reserve, the new concern for KRE and friends is the inverted yield curve.

“Loan growth is decent, according to a research note by Wedbush analysts Peter J. Winter and David Chiaverini, but the benefits are limited because margins have come under pressure now that the Federal Reserve has moved away from raising interest rates further,” reports Lawrence Strauss for Barron’s.

However, the yield curve inverted for the first time since 2007 in April and did so again last month. Historically, inverted yield curves are reliable recession indicators.

“A second problematic factor, cited by Wedbush, is that yields on long-term Treasury debt, a benchmark for the cost of mortgages and other loans, have been falling lately. That is a blow to another element of banks’ business model: borrowing short-term funds and making longer-term loans at higher rates,” according to Barron’s.

If inverted for an extended period, the yield curve presents another problem for regional banks: sapped profits.

“Profit margins are likely to decline slightly this quarter as interest payable to depositors rises and the so-called yield curve—the differentials among yields on shorter- and longer-term Treasury debt—flattens,” notes Barron’s, citing Wedbush.