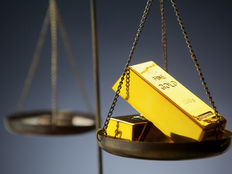 Gold ETFs Give Back After Five Months of Strong Inflows

Physically backed gold ETFs experienced outflows over November, marking the first month of redemptions after five consecutive months of inflows, as dissipating uncertainty and a shift to a risk-on mood diminished the demand for safety.

According to the World Gold Council, global gold-backed ETFs saw $1.3b billion in net outflows across all regions due to a stronger U.S. dollar, a Brexit extension and improving equity markets from the September and October highs. Nevertheless, global gold-backed assets under management still increased 35% this year as a result of increased investment demand and rising bullion prices.

Some of the selling may be attributed to slipping gold prices over November. Gold dipped below $1,500 per ounce, or 3.4% off from October highs.

Looking at the different regions, European-listed gold funds experienced outflows of $538 million, driven primarily by United Kingdom-based funds, which shrunk by 18.8 tons or the equivalent of $871 million in the wake of an extended Brexit deadline.

Meanwhile, North America-listed funds led regional outflows after contracting by 17.3 tons or $731 million in response to a strong USD and a rally in the equity markets that reached all-time highs on the strongest monthly performance since June.

Overall, global gold-backed ETFs added 385 tons of gold or $18.6bn this year after the strong inflows in the five months prior to November. Additionally, we witnessed increased activity in the gold ETF market, with global trading volumes rising to $170 billion per day in November from $156 billion per day in October, or 49% above the 2018 daily average.

“Uncertainty surrounding 2020 Fed expectations, together with increased bullish market sentiment, are set to impact gold’s price performance. However, the opportunity cost of investing in gold remains strong with COMEX net longs at near all-time highs and over 70% of sovereign debt trading with negative real rates,” World Gold Council’s Director of Investment Research, Juan Carlos Artigas, said in a note.