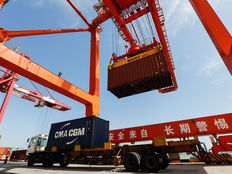 China’s imports and exports grew in June at a faster pace than expected, as reported by the Wall Street Journal, portending continued economic growth in a country still mired in Covid-19 outbreak fears.

Economists polled by the WSJ had estimated only a 23.2% growth for June, anticipating fears over a Covid-19 outbreak in a primary exporting region of China to heavily affect shipping.

Meanwhile, imports increased 36.7% from the previous year, which was slower than the 51.5% leap in May but still higher than economists’ predictions of 25.5%.

Together, imports and exports created a trade surplus for China of $51.5 billion in June, up from May’s $45.5 billion.

The growth was unanticipated, as collectively the trade surplus was anticipated to remain steady.

Customs spokesman Li Kuiwen spoke in a news briefing on Tuesday, saying that China’s imports and exports collectively hit their highest-ever level for the first half of the year. Monthly imports and exports also both had seen 13 consecutive months of year-over-year growth, Kuiwen reported.

Economists had feared that lockdown measures enacted at the end of May to contain outbreaks in the southern Guangdong province would negatively impact trade growth. The port in Shenzhen’s Yantian area is one of the most active in the world.

AVEM’s biggest allocations are in the emerging market powerhouse countries, such as India, Brazil, and Taiwan. But its largest allocation is in China, at 33%, making the fund well-poised to capitalize on Chinese economic rebound.