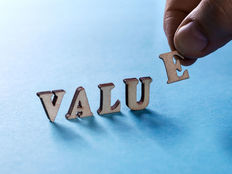 Encouraging economic data and news of another government spending plan, have bolstered ETFs with greater weight in economically sensitive sectors.

The U.S. economic expansion accelerated in the first quarter after massive government aid to households and businesses. A labor market report revealed 553,000 people filed for unemployment benefits two weeks ago, compared to 566,000 in the prior period, Reuters reports.

Nancy Vanden Houten, the chief economist at Oxford Economics, pointed to two factors supporting the economy now, including the reopening of the economy and aggressive stimulus efforts from both the federal government and Federal Reserve, the Wall Street Journal reports.

“We’re on a really good path here,” Vanden Houten told the WSJ, adding that a full recovery is still a long way off, a sentiment also echoed by the Federal Reserve.

The markets have also been weighing bets on further stimulus. President Biden outlined proposals Wednesday for a new American Families Plan, which would increase spending on child care, education, and paid leave.

Federal Reserve Chairman Jerome Powell also stated that the central bank would maintain its support of the economy and was hopeful as signs showed growth has revived and the labor market is strengthening.

“In this environment, it is very difficult to be bearish,” Gregory Perdon, co-chief investment officer at private bank Arbuthnot Latham, told the WSJ.

As a way to play a broad economic recovery, investors have looked to ETFs that track the value style, which includes more economically sensitive sectors. For example, the American Century STOXX U.S. Quality Value ETF (VALQ B) incorporates a smart beta strategy reminiscent of actively managed investments. It tries to reflect the performance of the iSTOXX American Century USA Quality Value Index, which is made up of 900 largest publicly traded U.S. equity securities screened and weighted by fundamental measures of quality, value, and income.