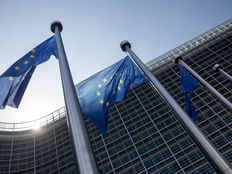 European equities were off to a strong start to August with the pan-European STOXX 600 index ending at a record closing high of 464.45, Reuters reports.

Among the standouts, British aero-engineer Meggitt surged 56.7% after U.S. industrial firm Parker-Hannifin sought to buy out its U.K. rival for $8.76 billion.

Over half of STOXX 600 companies have reported second-quarter earnings so far, and 67% of those that have reported beat profit estimates, according to Refinitiv IBES data.

“Having reached all-time highs post 1Q results, the breadth of positive EPS revisions in Europe remains very strong both in absolute terms and versus peers,” European equity strategists at Morgan Stanley said in a note. “Europe now sees the best earnings revisions of all global regions.”

Market observers have been increasingly optimistic about European earnings and economic reopening, which have helped lift the benchmark STOXX 600 to end July on its sixth consecutive month of gains despite inflation concerns, rising Covid-19 cases in Asia and a regulatory crackdown in China.

Investors interested in international markets can consider ETF strategies for foreign exposure. For example, the Avantis International Equity ETF (AVDE B) is built upon an academically-supported, market-tested framework to identify securities with expected high returns based on market prices and other company information. Relying on trading and portfolio management processes, the Avantis team analyzes whether the perceived benefits of a trade overcome its associated costs and risk. AVDE primarily invests in a diverse group of companies of all market capitalizations across non-U.S. developed market countries, sectors, and industries, emphasizing investment in companies believed to have higher expected returns.