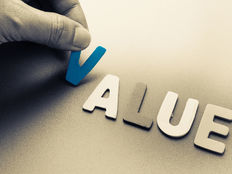 Market Sell-Off May Be an Asset to Value Stocks

Amidst the recent market sell-off, value stocks may be better positioned than growth. Investors sold off stocks on Thursday following the Federal Reserve’s announcement the day before that it would raise rates by 50 basis points.

The S&P 500 declined by 3.6% on Thursday, more than reversing Wednesday’s 3% rally. The drop was led by tech, tech-related, and consumer discretionary stocks. The Nasdaq, meanwhile, dropped by 5%.

The rise in yields weighed on more interest rate-sensitive growth stocks, and poor quarterly earnings from e-commerce companies made tech the worst performer within the growth sector.

“Following this downturn, our measure of market valuation is now well into the undervalued territory,” wrote Sekera. “According to a composite of the stocks followed by Morningstar’s equity research analyst team, the broad U.S. equity market is now trading at a 12% discount to fair value.”

Value tends to benefit from rising real rates. UBS has noted that since 1975, value has outperformed growth across the cycle in periods when inflation is 3% or more. On Thursday, for example, U.S. value stocks outperformed U.S. growth stocks by one percentage point.

AVUV is an actively managed ETF that seeks long-term capital appreciation by investing primarily in U.S. small-cap companies. It is designed to increase expected returns by focusing on firms trading at what are believed to be low valuations with higher profitability ratios.

Meanwhile, AVDE identifies securities with expected high returns based on market prices and other company information. The fund primarily invests in a diverse group of companies of all market capitalizations across non-U.S. developed market countries, sectors, and industries, emphasizing investment in companies believed to have higher expected returns.

AVDV mainly invests in a broad group of non-U.S. small-cap value companies believed to have higher expected returns across developed market countries, sectors, and industries. AVLV invests in a range of U.S. large-cap companies and seeks companies that are trading at low valuations with higher profitability ratios. AVUS invests primarily in a diverse group of U.S. companies of all market capitalizations, across sectors and industries, emphasizing investment in companies believed to have higher expected returns.