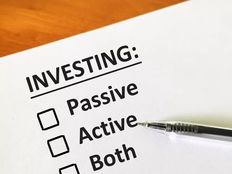 Something rare is occurring in 2022, and unfortunately for investors, it’s not positive. Bonds, cash, and equities are declining in unison and, in some cases, flirting with bear markets.

Typically when stocks falter, investors seek refuge in bonds, but with the Federal Reserve hiking interest rates, the widely followed Bloomberg U.S. Aggregate Bond Index is close to a double-digit year-to-date loss. That’s enough to make some fixed income investors throw in the towel, but relief could be available in the form of active management.

Enter active bond exchange traded funds, such as the Avantis Core Fixed Income ETF (AVIG), which attempts to beat the Bloomberg U.S. Aggregate Bond Index. Amid this year’s bond market tumult, some experts are highlighting the benefits of active management.

“Active managers can consider a much broader spectrum of potential investments, and can act on informed assessments and market outlooks, to construct a portfolio that may differ from the benchmark-driven exposures of a passive strategy,” according to Fidelity research. “These advantages have allowed the majority of active managers in various bond fund categories to outperform fixed income benchmarks.”

For its part, the $233.2 million AVIG holds 377 bonds, which is a focused lineup relative to competing passive bond strategies that track indexes like the “Agg.” However, AVIG offers an array of other benefits. Notably, as an active fund, AVIG can reduce interest rate risk, which is obviously a primary consideration in today’s environment.

On that note, AVIG is considered an intermediate-term bond fund or long-dated equivalents. That implies investors get credible portfolio diversification with AVIG. The ETF’s duration is 6.6 years, and 60% of its holdings have maturities of two to four years or four to six years.

Additionally, as an active fund, AVIG can also better capitalize on credit opportunities than passively managed rivals, many of which are loaded with Treasuries and mortgage debt.

“Different sectors of the bond market have had a range of returns relative to the aggregate market overall. An active portfolio manager may seek to generate excess return by overweighting (holding more of) sectors the manager perceives to be likely to generate better returns, while underweighting (holding less of) the remaining sector,” added Fidelity.

AVIG charges just 0.15% per year, or $15 on a $10,000 investment, making it cost-effective compared to actively managed fixed income mutual funds.