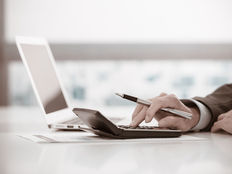 Value stocks and related exchange traded funds led the rebound off Tuesday’s session lows as traders waited on the Federal Reserve’s policy meeting before committing to any real direction.

U.S. benchmarks rebounded off early Tuesday lows, with the S&P 500 dancing around a correction territory, or 10% below its record high.

“Uncertainty is what’s behind it all,” Robert Pavlik, senior portfolio manager at Dakota Wealth, told Reuters. “In that uncertainly the market becomes a flock (of) sheep. Selling begets more selling, and it’s driven by the Fed, inflation, and geopolitical tensions.”

The members of the Federal Open Markets Committee (FOMC) assembled on Tuesday for a two-day monetary policy meeting. On Wednesday, market observers will comb over the release, along with Chairman Jerome Powell’s subsequent statement, to see where the central bank is heading on key interest rate hikes to wrangle the elevated inflation levels.

“Hopefully we’ll get clarity on Wednesday from the Federal Reserve, although I think we’ll end up with more questions than answers about where the Fed is likely to take interest rates in 2022,” Pavlik added.

Further adding to the risk-off sentiment, geopolitical tensions in eastern Europe are adding another layer of uncertainty. NATO has placed forces on standby, and the United States committed more troops on heightened alert in response to a military buildup of Russian forces along the Ukrainian border.

Looking further out, investors remain optimistic about the earnings season, which should help support the outlook for corporate America.

“We expect the earnings season to reassure, and in a worst-case scenario could see a return of the ‘Fed put,’” JPMorgan strategists said in a note to clients, the Wall Street Journal reports.

ETF investors interested in a targeted approach to the value segment can look to the American Century STOXX U.S. Quality Value ETF (VALQ B). VALQ’s stock selection process includes a value score based on value, earnings yield, and cash flow yield, along with a sustainable income score based on dividend yield, dividend growth, and dividend coverage.

The American Century Focused Large Cap Value ETF (FLV B) tries to achieve long-term returns through an investment process that seeks to identify value and minimize volatility. FLV holdings and value stocks usually trade at lower prices relative to fundamental value measures, like earnings and the book value of assets.

Lastly, the Avantis U.S. Small Cap Value ETF (AVUV ), an actively managed ETF, seeks long-term capital appreciation. The fund invests primarily in U.S. small-cap companies. It is designed to increase expected returns by focusing on firms trading at what are believed to be low valuations with higher profitability ratios.