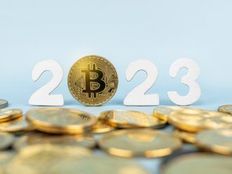 2022 Could Still Be Volatile Despite Bitcoin Rising

Bitcoin prices to start the new year have been slightly leaning towards the upside. However, it could be another volatile year for the cryptocurrency market as it slowly limps into 2023.

“Cryptocurrencies have crept into the new year, licking their wounds after the carnage of 2022,” reported Reuters. “The overall global crypto market cap has risen 5% to $871 billion since Jan. 1, but it’s still down over 57% from this time last year.”

To end 2022, bitcoin was stuck in a sideways motion trap. It’s been relatively quiet in terms of volatility, but that could just be the proverbial calm before the storm.

“Bitcoin itself has gained 4.3% since the start of 2023, though stuck in a narrow range between $16,500 and $17,300,” the report added. “The world’s biggest cryptocurrency is eerily subdued, with its 7-day volatility dropping to levels not seen since October 2018, according to Refinitiv Eikon data.”

“It will be a year for the patient, as we do not anticipate prices nearing former all-time highs in 2023,” said Vetle Lunde, senior analyst at Arcane Research, in the same Reuters report.

One of the biggest indicators of potential upside, or even downside, is trading volumes. The activity in cryptocurrency trading volumes could provide insight on what to expect for 2023, and right now, volumes are relatively staid, as reported by Reuters.

That’s not a surprising metric given last year’s downside in the crypto market, which could have essentially provided the digital assets market with a much-needed cleansing. Given the bull run in 2021, speculation was reaching fever pitch, especially with the entry of institutional money.

That said, a new type of investor could emerge amid the chaos. One that focuses on bitcoin or other cryptocurrencies as a long-term growth option as opposed to a fly-by-night money-maker via high-speed trading — that could be a good thing for the crypto market in order for it to survive in the long run as a viable asset alongside stocks, bonds, and other traditional asset classes.