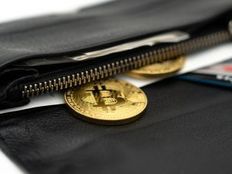 A Chance for XBTF on the Safe Haven Front

With its reputation for volatility, bitcoin usually isn’t viewed as a safe haven asset, refuting once popular claims the cryptocurrency could be “digital gold.” On the other hand, it’s not reasonable to argue that given the fact that bitcoin is just 13 years old and gold is thousands of years old, claims of the former being a legitimate safe haven may have arrived prematurely. However, some good news may be arriving for exchange traded funds such as the VanEck Bitcoin Strategy ETF (XBTF ).

Some market observers say that in recent weeks, bitcoin’s correlations to gold have been increasing. Indeed, correlations ebb and flow over time, meaning it’s possible for assets to be intimately correlated today and lose that grip over time. Still, it’s pertinent to investors considering XBTF that bitcoin has been moving with gold recently.

“At the start of September, the relationship between gold and Bitcoin once again turned positive, and in early October, the correlation reached its highest point in a year reported Alys Key for Decrypt.

Interestingly, for the nine months ending February this year, bitcoin and gold were tightly correlated, but those links snapped as investors shed risk assets amid macroeconomic calamity. However, the correlations between the largest cryptocurrency and the yellow metal resumed in September.

That scenario arrived as the digital asset’s correlations to equities declined, which is potentially a sign that bitcoin could be embraced, to some extent, as a safer alternative to stocks. Interestingly, the digital coin has been notably less volatile than the S&P 500 and Nasdaq 100 Index (NDX) in recent weeks.

“A decelerating positive correlation with SPX/QQQ and a rapidly rising correlation with XAU [gold] indicate that investors may view bitcoin as a relative safe haven as macro uncertainty continues and a market bottom remains to be seen,” wrote Bank of America Securities analysts Alkesh Shah and Andrew Moss in a recent report.

Increased correlations to gold could make bitcoin sensitive to the Federal Reserve’s monetary policy and dollar strength, like the digital coin already has been this year. Conversely, if the central bank signals it could lay off the rate-hiking gas pedal in 2023, that could set the stage for bitcoin to potentially reclaim some of the market value lost this year.