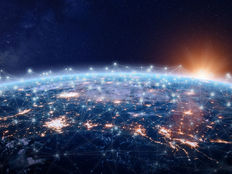 Amplify ETF’s flagship crypto ETF, the Amplify Transformational Data Sharing ETF (BLOK B-), invests in the major movers in the crypto asset space. The fund is one that invests in companies that are harnessing the potential of blockchain in all of its forms, but they don’t just do it by the numbers.

In the latest BLOK-Chain Monthly, Dan Weiskopf and Mike Venuto, the co-portfolio managers, discussed the performance of BLOK and what overall changes had been made in the past month. July saw a great deal of volatility in the crypto space, with many investors capitulating, as indicated in the trading volumes of the securities carried within BLOK.

Of those changes, one was to increase positions into RIOT Blockchain (RIOT), but not because of number-crunching research done on a screen. Instead, it was based on a site visit out to the RIOT facility in Texas and the appreciation they had for how RIOT’s brick and mortar was run.

“As active portfolio managers in the industry that is made up of bricks and mortar, we believe meeting in-person with management is an important part of our due diligence process. Too often people look at Bitcoin and blockchain as just an asset class, and fail to appreciate the complicated foundational ecosystem behind the disruption,” the authors said.

The Amplify Transformational Data Sharing ETF (BLOK B-), which now tops $1.2 billion in AUM and is the largest of the blockchain ETFs, is actively managed and invests in companies directly involved in developing and using blockchain technology through digital and in-person research methods.

The BLOK ETF spreads its holdings across the size spectrum. As of the end of June, the fund has a market capitalization breakdown of 45.7% of holdings in large-cap companies, 24.8% in mid-cap companies, and 27.2% in small-cap companies.