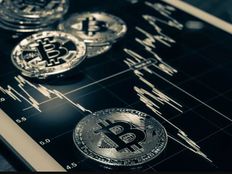 Crypto Funds Saw Huge Inflows Within the Past Week

“Digital-asset investment funds attracted $127 million of new money during the week through March 4, a report Monday from the digital-asset manager CoinShares showed,” CoinDesk reports. “The regional breakdown comprised $151 million of inflows in the Americas and outflows of $24 million in Europe.”

“Last week’s inflows came as the bitcoin market appeared to stabilize, after a few weeks of turbulence sparked by Russia’s invasion of Ukraine,” Bloomberg adds further.

Despite the correlation with the volatility in the stock market as of late, investors are still maintaining their support of cryptocurrencies and digital assets as a whole.

“Investors remain supportive of digital assets despite the recent geopolitical events,” CoinShares writes in the report.

The leading cryptocurrency bitcoin saw its price soar towards the $45,000 mark, giving bullish BTC investors something to cheer about. Bitcoin has been languishing since the start of 2022, following the traditional stock market indexes, which defied its purported status as an asset uncorrelated to the stock market.

Bitcoin reached a high of $69,000 back in November 2021, but as inflation fears heading into the new year hit the stock market, the leading cryptocurrency followed. Ukraine has been seeing an outpouring of support with a number of donations coming in the form of bitcoin, which has helped its price.

“Bitcoin funds saw inflows of $95 million last week, the most since early December,” CoinDesk adds further. “Ether funds saw minor inflows of $25 million, the most in 13 weeks, and potentially a sign of a changing mood after the negative sentiment that prevailed over the past few months, according to CoinShares.”

As opposed to directly investing in the cryptocurrency itself, crypto funds offer another way to get alternate exposure to bitcoin to play its future price increases. As such, ETF investors may want to play on this bullish notion with the ProShares Bitcoin ETF (BITO ).