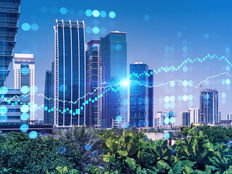 Thursday’s trading session brought the debut of Facebook’s “Horizon Worlds,” which marks a step forward for its foray into the metaverse.

The social media giant changed it name to “Meta” in October as CEO and founder Mark Zuckerberg highlighted the move to online communities that feature these virtual worlds. In the broader context, the metaverse refers to the use of three-dimensional virtual environments that are gaining in popularity.

Horizon Worlds, which interacts with other users via avatars through virtual reality headsets, will be open to users in the U.S. and Canada who are over the age of 18. The debut is the byproduct of Facebook’s acquisition of Oculus back in 2014 for about $2 billion.

“In Horizon Worlds, users of Facebook’s Oculus virtual reality headsets can create a legless avatar to wander in the animated virtual world,” CNBC reports. “There, they can play games and interact with other users’ avatars.”

Before the debut, Facebook was already busy building an executive team that would bring this move to the metaverse into fruition. In addition, the social media company plans to shell out over $10 billion in order to continue building out its metaverse platform.

“Our hope is that within the next decade, the metaverse will reach a billion people, host hundreds of billions of dollars of digital commerce, and support jobs for millions of creators and developers,” Zuckerberg wrote in October.

Opportunities for Expansion Via the Metaverse

Facebook’s move towards expansion via the metaverse underscores how social media is changing. From simple words and messages, users are now able to communicate within a virtual environment to practically mimic real-life interaction.

“The metaverse is more of a coop of all digital platforms realizing maximum market share in an evolved demand-driven environment,” said Geoff Kowalski, chief revenue officer at ESTV. By accepting that consumers are multi-screening and engaging brands and content across platforms simultaneously, there is a willingness for brands to open their markets so consumers can continue their engagement when crossing platforms, serving as influencers for said brand throughout the metaverse.

Cryptocurrencies can also benefit from companies moving to the metaverse with users performing transactions with one another via digital currency. While cryptocurrencies have come down from their highs in recent months, it opens up opportunities for potential investors to get in on discounted prices — an opening to purchase cryptocurrencies that can especially interact with the metaverse in 2022 and beyond.