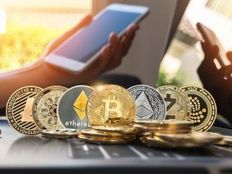 With bitcoin prices sliding and other cryptocurrencies following suit, long-term crypto bulls will take any bit of good news they can get.

Those good tidings are out there, but how they impact bitcoin, and broader crypto prices remains to be seen. Still, it’s noteworthy that Paul Tudor Jones, the founder and chief investment officer of Tudor Investment, continues to see value in holding modest crypto allocations.

Macroeconomic factors, including global governments taking on potentially untenable amounts of debt, could bode well for select digital assets over the long term.

“Jones believes that the debt dynamic is so dire right now that the government could conduct fiscal retrenchment in the near future. Fiscal retrenchment means that a government has to introduce deflationary fiscal measures to reduce the amount of borrowing and debt, including raising taxes and cutting spending,” reports Yun Li for CNBC.

Both SATO and BLKC are pertinent in this conversation. SATO is home to 41 holdings, including the Grayscale Bitcoin Trust (GBTC) and a variety of bitcoin miners – a roster that positions the ETF for a rebound in bitcoin prices.

On the other hand, BLKC, which follows the Alerian Galaxy Global Blockchain Equity, Trusts, and ETPs Index, features a larger roster that runs the gamut of GBTC, miners, traditional technology and energy companies, as well as fintech names.

With exposure to the likes of Microsoft (NASDAQ: MSFT), Intel (NASDAQ: INTC), Cisco Systems (NASDAQ: CSCO), Nvidia (NASDAQ: NVDA), and Texas Instruments (NASDAQ: TXN), among others, BLKC could be a prudent way for investors to position for a bitcoin rebound while allocating to some venerable, now undervalued large- and mega-cap stocks.

“In a time when there’s too much money, which is why we have inflation, too much fiscal spending, something like crypto, specifically bitcoin and Ethereum when there’s a finite demand of that, will have value at some point. Someday. I don’t know when that will be,” Jones said in the CNBC interview.