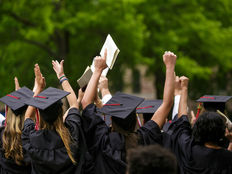 One of the primary catalysts for Bitcoin’s recent bull market is increasing adoption of the digital asset among institutional investors. This popularity is extending toward some well-heeled college endowments.

Some Ivy League endowments are proving to be big fans of Bitcoin, and they’re buying the crypto currency on a well-known brokerage.

“Some of the largest university endowment funds in the U.S. have been quietly buying cryptocurrency for the past year or so through accounts held at Coinbase and other exchanges, CoinDesk has learned. According to two sources familiar with the situation, Harvard, Yale, Brown and the University of Michigan as well as several other colleges have been buying crypto directly on exchanges. (Several Ivy League endowments took an interest in blockchain technology via crypto-focused venture capital funds back in 2018.),” reports Ian Allison for CoinDesk.

Cryptocurrencies remain largely unregulated, which has deterred many potential investors. The Securities and Exchange Commission has so far rejected the rollout of a bitcoin ETF, arguing that there is not enough protection against fraud and market manipulation in the cryptocurrency market.

There are indications that some universities have been involved with Bitcoin for some time.

“It could be since mid-2019,” a source told CoinDesk. “Most have been in at least a year. I would think they will probably discuss it publicly at some point this year. I suspect they would be sitting on some pretty nice chunks of return.”

Many Bitcoin proponents consider the crypto to be akin to ‘digital gold’, a possible safe-haven asset and a means to protect against inflation.

In a recent research note, JPMorgan said Bitcoin could hit $146,000 in the long term as it competes with gold as an ‘alternative’ currency. The investment bank’s strategists noted that Bitcoin would have to become substantially less volatile to reach this price, however, as the crypto is known for its extreme swings.

“Back in 2018, Yale University Chief Investment Officer David Swensen made headlines by backing two crypto-focused venture funds, one run by Andreessen Horowitz and another launched by Coinbase co-founder Fred Ehrsam and former Sequoia Capital partner Matt Huang,” reports CoinDesk. “Several other universities followed Yale in backing crypto VCs, including Harvard, Stanford, Dartmouth College, MIT, University of North Carolina and Michigan. Clearly, some of those schools appear to be taking the next step by investing directly in crypto assets.”