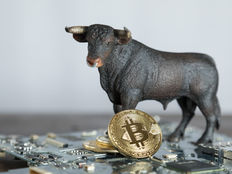 While there are expectations that the current “crypto winter” will extend into early 2023, consensus is building that bitcoin prices will rebound, perhaps in dramatic fashion, in the second half of the new year. If that resurgence materializes, it could support upside for equity-based exchange traded funds such as the Invesco Alerian Galaxy Blockchain Users and Decentralized Commerce ETF (BLKC ) and the Invesco Alerian Galaxy Crypto Economy ETF (SATO ).

Of course, smart investors demand more than just the notion that BLKC and SATO are 2023 rebound candidate simply because bitcoin is as well. They demand solid fundamentals and credible signs that such a resurgence can really materialize.

Fortunately, there are signals emerging from large bitcoin players, also known as “whales,” that they’re still constructive on the largest digital currency. For the nine days ending Dec. 14, whales bought $726 million worth of bitcoin, according to Santiment. Whale addresses are considered to be those holding 100 to 10,000 bitcoin, and there are about 15,850 such addresses, notes Santiment.

“By comparison, there are 43,460,000 total Bitcoin addresses at this time. This means that key whale addresses, who typically make decisions that lead future price movement, make up 0.0364% of all BTC addresses,” adds the research firm.

Over the course of bitcoin’s roughly 13 years on the market, it’s been widely known that big buyers are the prominent determinant’s of price action, and it’s long been the case that addresses with smaller holdings of the cryptocurrency far outnumber those with substantial stakes.

None of those factors are surprising, but in assessing the potential bull case for bitcoin in 2023 and those of BLKC and SATO, it’s worth noting that the number of whale addresses is increasing.

“Furthermore, we have seen 159 new addresses holding between 100 to 10,000 BTC in just the past three weeks. This is the fastest growth of these addresses in 10 months, which was right as FUD was peaking after the Russia-Ukraine war was announced to the world,” adds Santiment.

The uptick in whale buying is important for another reason: That group have been net sellers of bitcoin for 14 straight months.

“For about 14 straight months, Bitcoin’s whales have been reducing their supply held and dumping after the wildly bullish 2020 and 2021 that crypto experienced. Prices have been falling in tandem with these dumpoff,” concludes Santiment.