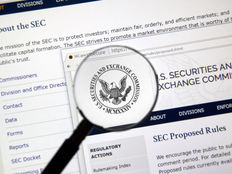 On May 26th, the SEC announced that it would extend its review process of the WisdomTree Bitcoin Trust’s application by 45 days. This comes on the heels of the SEC’s announcement to delay a decision on VanEck’s Bitcoin Trust application, which was filed in December of 2020, until at least June.

The WisdomTree Bitcoin ETF application was initially filed on March 11th. The SEC began its review in April.

Since the first Bitcoin ETF application was filed – and rejected – eight years ago, at least twelve applications have been sent to the SEC. Currently, eight sit on its desk, as well as several other crypto asset and crypto-adjacent filings.

Despite predictions that a U.S. Bitcoin may finally be approved this year, the SEC continues to delay making a decision on any of the applications currently up for review.

WisdomTree’s proposed fund would track the CF Bitcoin US Settlement Price, which is essentially the same as the CME CF Bitcoin Reference Rate used by its European ETP counterpart.

The CME CF Bitcoin Reference Rate is the basis for the Bitcoin futures traded on the CME. It’s calculated by aggregating the trade flow of five major Bitcoin spot exchanges per hour, with each hour divided into twelve five-minute chunks, then equally-weighting the average of the volume-weighted medians of all twelve chunks.

This isn’t WisdomTree’s only crypto filing before the SEC, however. On May 27th, the firm filed an application for an Ethereum ETF, making it the second U.S. asset management firm to do so. No custodians have been named for either fund.

In addition, WisdomTree filed for a short-term Treasury fund based on blockchain on April 28th.