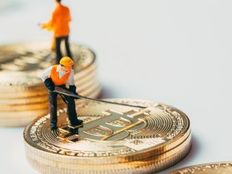 From an investment perspective, bitcoin is rife with fish-related analogies. There are whales, or those investors whose bitcoin addresses hold 100 to 10,000 bitcoin. On the opposite end of the spectrum, there are shrimp, or those bitcoin bulls that own less than one bitcoin.

On a standalone basis, owning a single bitcoin doesn’t amount to market-altering status, but on the other hand, the collective shrimp community is large. That makes sense because the largest digital currency has long sported five-digit price tags, meaning it’s cost-prohibitive for many market investors to acquire one coin in a single fell swoop.

There are plenty of shrimp in the bitcoin sea, and as of late, many of those market participants are using depressed prices to add to their stakes.

“This group of retail investors has invested heavily in BTC throughout 2022. Their cumulative balance now sits at 1.2 million BTC — roughly 6% of BTC’s supply,” reported Oluwapelumi Adejumo for CryptoSlate. “During the last 30 days, BTC mostly traded between $16,000 and $18,000. BTC’s price has struggled following FTX’s implosion, which birthed a contagion that has affected other crypto firms like Genesis, BlockFi, and Midas.”

Indeed, market observers and analysts tracking some of the stocks found in BLKC and SATO pay more attention to whale buying and selling, but shrimp activity is also worth monitoring for multiple reasons. First, shrimp account for 6% of bitcoin holdings. Second, owing to the fact that they’re buying small amounts, they’re likely to be more devoted holders and less likely to sell amid price declines. On that note, shrimp are proving enthusiastic about bitcoin in recent weeks.

“The last time shrimps showed this kind of conviction was in July when BTC was trading between $20,000 and $25,000. At the time, shrimps accumulated around 60,000 units of BTC as well,” according to CryptoSlate.

Over the near term, a positive scenario for BLKC and SATO member firms would be stability in bitcoin pricing and whales easing off the selling. If the whales do that and the shrimp continue nibbling, the Invesco ETFs could be in for better things as 2023 unfolds.