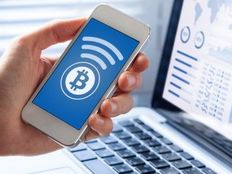 Correlations between bitcoin and traditional asset classes, such as stocks and bonds, are often discussed. After all, in a perfect world, bitcoin and cryptocurrency at large would not be highly correlated to stocks so that crypto could function as a portfolio diversifier. That hasn’t been the case in 2022, as bitcoin wilted alongside bonds and broader equity benchmarks. However, with some market observers forecasting a bitcoin rebound in the back half of 2023, exchange traded funds such as the VanEck Bitcoin Strategy ETF (XBTF ) could be worth evaluating.

In fact, the actively-managed XBTF could be a compelling way to play short-term swings in bitcoin next year because it’s a futures-based ETF. That methodology could prove relevant on another front: Bitcoin’s penchant for forecasting tops and bottoms in equities. That’s right: bitcoin might have more predictive power than it’s given credit for.

“History shows that, on average, BTC has topped ~48 days and bottomed ~10 days before the SPX [S&P 500],"according to a recent report by Delphi Digital. “Over the past five years, all major price reversals in BTC have preceded those in major equity indices.”

Arguably, it’s interesting that bitcoin is developing such a relationship with stocks. After all, traditional valuation metrics don’t apply to digital assets. Likewise, corporate fundamentals aren’t relevant to cryptocurrency and a case can be made that the same applies to global macroeconomic trends.

“The crypto market is one of the purest bets on global liquidity expansion and currency debasement. Not only is it influenced by macro factors, but when market conditions change, it’s often the first to react,” added Delphi.

One area where bitcoin, and thus XBTF, could make headway in 2023 is to prove to be a reliable inflation-fighting asset. While expectations are in place that central banks may slow monetary tightening, inflation is still high, as is supply for fiat currency.

“Digital assets, until now, have proved to be narrative-driven, with valuations almost entirely dependent on the pace of expansion in fiat currency supply, mainly the U.S. dollar and factors like inflation rate that influence the Federal Reserve policy,” reports Omkar Godbole for CoinTelegraph.