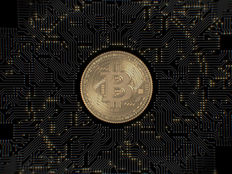 Home to fintech disruptors such as Square (SQ) and PayPal (PYPL), ARKF offers direct access to companies providing avenues for customers to transact in and buy and sell bitcoin and other digital currencies. But there’s more to the ARKF crypto story.

“On Monday, the Office of the Comptroller of the Currency (OCC) published an interpretive letter addressing INVNs – independent node verification networks, or public blockchains – and stablecoins,” said ARK analyst Yassine Elmandjra in a note. In the letter, the OCC announced that financial institutions will be able to use INVNs to streamline payment functions like processing, validation, and settlement.”

Blockchain, the underlying technology that forms the basis for cryptocurrencies, has plenty of other real-world uses. Blockchain itself has been a hot topic with companies like investment firm UBS looking to implement the transactional technology in the financial sector. Other industries, including healthcare and retail, are expected to be major adopters of blockchain.

“The OCC has recognized that bank-permissible activities may be conducted with new and evolving technologies,” according to the OCC letter. “INVNs and related stablecoins represent new technological means of carrying out bank-permissible payment activities and therefore conclude that a bank may validate, store, and record payment transactions by serving as a node on an INVN.”

Blockchain continues to capture investor interest as the technology keeps gaining mainstream attention. According to the World Economic Forum, “10% of the global GDP is predicted to be stored on blockchain platforms by 2027.”

The OCC letter could indicate decentralized finance is gaining momentum, and that could spur increasing adoption of digital currencies.

“In our view, Bitcoin could become the default settlement system for banks and businesses. Unlike traditional settlement systems, Bitcoin’s network is global and cannot censor transactions,” notes ARK’s Elmandjra.