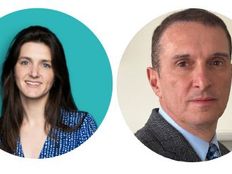 The Future of Finance: Bianco, Stewart, and Advisors as "Hero Ants"

Over the past few weeks, we’ve been building a framework for our 100-minute “Future of Finance” discussion at next month’s Exchange conference, but it’s also a framework that I think extends beyond a single conference or event.

The short version is essentially this:

So far, I’ve discussed the current big problems of institutional failures, then previewed the on-stage Future of Finance discussions I’ll be having with Adam Butler (Resolve), Mike Green (Simplify), and Danielle DiMartino Booth (Quill Intelligence), with a focus on modern democratic capitalism and the institutions that keep it running (companies, governments, agencies).

A very normal reaction to all this is: “So what? Why should advisors care? After all, we’re just trying to do a job here, not running for public office.”

Which is why I need to talk about ants and productive exploration.

The “ant metaphor” isn’t original — it’s a major feature of Mike Mauboussin’s excellent 2007 book “ More Than You Know among other things. If you’re not familiar with it, here’s the basic gist.

Imagine we investors are all ants in search of a tasty treat, trying to survive by getting along with the crowd:

What’s the tasty treat? It could be anything. It’s just resources. Where the value is. Risk-adjusted total returns available from the market.

As advisors, your job is to ferry along a big posse of ants with access to a lot of resources. You help guide those ants to be efficient, effective, and safe in their pursuit of long-term success, however you want to define it.

But here’s the thing: That tasty treat never lasts forever.  What we’re talking about with all this “institutional failure” stuff is threats to the treat. To the status quo of survival.

So how do ants in the real world survive?

They adapt. For a while, the ants will focus on the big obvious food source, but at some point, signals will come back from the ants carrying the food indicating problems. One signal might be, "Hey, the treat’s getting smaller.” Another might be, “Uhh, the river’s rising around the food.” Or even, “Y’all, the treat’s stale now, can’t we find something better?” These signals indicate that the existing system has become fragile, that the endless pursuit of efficiency will lead to ruin.

Now, some ants, upon receiving the signal that something is amiss, just go wildly running off in a random direction, panicking their little ant brains over the colony’s future. But some ants will explore their environment, pick up on signals, and eventually find new resources — or even just new pathways to the same resources. They make the colony not just efficient, but resilient. They’re the Hero Ants.

You see where I’m going with this: Financial advisors are the Hero Ants of democratic capitalism. For my entire career, financial advisors have done the hard work of productive exploration; they’ve navigated regular people through the DotCom boom, 9/11, the global financial crisis, the “lost decade,” and the ongoing COVID pandemic. Each of those crises sent some new “signal” back to the greater colony of investors, and it was up to advisors to figure out what was important and what was noise. Which they did, with generally a high level of accuracy.

That skill of filtering for what’s important is called relevance realization, and it’s fractal: All life does it, from single-celled organisms all the way to you.

When I look at the “hot topics” in finance over the last decade, few topics seem to have engendered as many virtual (and perhaps even physical) fist fights as both ESG and crypto.

For very good reason. If, as we’re arguing, corporate statehood is usurping the traditional role of governments and even family in providing social safety nets, food, and — if you work at Twitter, I guess — even lodging, then it makes a lot of sense to care a great deal about who runs companies and what those companies are doing with capital.

In addition, if, as we’re arguing, the role of government is being challenged throughout the economy, then exploring non-governmental economic systems (i.e., DeFi) and non-corporate ownership systems (i.e., DAOs) also makes a lot of sense.

Put another way: There are a lot of exploratory trails Hero Ants can follow that lead to ESG and crypto. For logical reasons, that strikes me as worth investigating.

That’s why I’ve asked Jim Bianco of Bianco Research (who, on top of being a sharp macro guy, is one of the clearest minds on the realities and fictions of crypto) and Georgia Stewart of Tumelo (one of the only firms actually working to amplify the voice of individual investors inside individual companies) to speak in Miami.

Here’s a preview of Jim Bianco’s remarks about crypto (with some excellent footnotes from VettaFi’s Karrie Gordon):

My favorite statistic on the institutional side is that there are 11 sectors in the S&P 500, and the worst-performing one over the last 15 years has been the financial sector. The worst-performing within financials has been the banks. The market is screaming, "Something’s wrong with the financial sector." It needs a disruption. I think that DeFi and DAOs are the natural disruptions coming to the system right now. - Jim Bianco, president and founder of Bianco Research

And Georgia Stewart’s thoughts on ESG:

On the corporate governance side, the way that occurs at the moment is not very effective. Certainly, the way shareholders are able to influence boards is not very effective. It's archaic. Annual General Meetings were designed because everyone would be in the same country at the same time at the same board table. The issues also were less globalized — there were fewer issues and fewer consequences. - Georgia Stewart, CEO of Tumelo

As we were prepping for this session, I asked a few questions of Jim and Georgia:

Nadig: Let’s look first through the lens of DeFi (decentralized finance) and DAOs (decentralized autonomous organizations). If money is the mode by which we express and move power in our current institutions, do you think DeFi and DAOs can actually solve some of our bigger institutional problems? Or are we simply making another set of institutions that won’t get the work done?

Bianco: I think it can [solve the problems], because what it’s doing is it’s getting rid of institutions. Early examples like GitHub show it’s a very efficient way to manage a public good. The problem is, it takes institutional power away from the government and from the financial system.

With crypto, we’re saying money is now private property. We’re going back to an efficient form of bartering, with an accepted medium of exchange that I own and that you own, which cannot be censored, and which cannot and does not need permission. All our net worth is held by financial institutions: A crypto system removes that and makes it now a piece of private property. That is a powerful thing -- and a very scary thing for governments.

I do think that technology with the blockchain is making something possible that’s never been possible before. Ten years ago, if we had this conversation about doing all this stuff, we would have said, "Yeah, that’s great in theory, but how do we do it?" Now the reality exists.

Nadig: What about within the institutional framework? How are we currently solving for "money=power" in the face of institutional decay?

I think the reason we’re not already there is the cost-benefit analysis for a retail investor or even an institution, like a pension fund. That cost has historically been very, very high from an individual resource perspective, and the impact is fairly unknown.

Which comes back to the future of finance. Why should advisors care about crypto, or DAOs, or ESG? Because the job of a financial advisor is to be an adaptive leader — the Hero Ant. Great financial advisors fine-tune their filters. They constantly test the new ideas coming out of Wall Street, rejecting those that are distractions and watching carefully for environmental signs that the tasty treat may have some issues. That’s how they bring to their clients resilience — the ability to survive and adapt for the long term.

Dave can be found on LinkedIn and Twitter at @DaveNadig, where you can follow Jim Bianco @biancoresearch and Georgia Stewart @IAmGeorgiaS.

1: Financials haven’t always been the underperformer of the S&P 500’s sectors. From the onset of the pandemic in March 2020 until Russia’s invasion of Ukraine in February 2022, energy was actually the lowest-performing sector in the S&P.

Aside from those 11 months, however, financials have consistently been the lowest-performing sector, typically by a large margin, with banks weighing heavily on the sector. Since January 2013, the banking sub-sector has risen 108%, compared to the overall financials’ sector gains of 158%. On a more recent time frame, since January 2020, banks have dropped 6%, compared to a 19% gain for financials overall.

2. Annual General Meetings were established back in 1862 as part of the first Companies Act as a way for shareholders to engage with companies democratically. Among other decisions, shareholders could help choose board representatives, review annual financial statements, and act as a check on management.

Requirements for holding AGMs varies by country. Within the U.S., the rules that govern them differs depending on individual state laws and if the company is public or private. It’s also one of the only times that shareholders and company directors will meet together throughout a given calendar year.

With the increase in shareholder activism, AGMs have gained increasing attention in recent years. The ousting of three Exxon board members by Engine No. 1 notably occurred at Exxon’s AGM in 2021. Since the onset of the pandemic, there has been a larger push to conduct hybrid AGMs to allow for both in-person and virtual attendance. However, uptake has been slow across industries.

3: Fun fact, bartering is actually considered legal trade in the U.S.; as such, that means the IRS also treats it as taxable income.

4: Censorship when it comes to the blockchain is a convoluted topic but might arguably be the single most important aspect of a blockchain. As it turns out, not all blockchain technology is created equal, or even remotely similarly, which can mean a number of things for those transacting on individual networks.
From a technological standpoint, blockchains are often talked about based on their censorship resistance, which is the ability to freely transact, freedom from confiscation, and the transaction immutability offered. It’s not the same as transparency of a network, however, or privacy.

Ethereum is one of the most noteworthy networks that have been grappling with general censorship concerns in the last six months as the crypto community has argued about whether blockchains should be inclusive of government sanctions or remain wholly decentralized. In November 2022, 79% of blocks on Ethereum’s blockchain were compliant with the U.S. Treasury Department’s Office of Foreign Assets Control list of sanctioned parties — in other words, any transactions that included an OFAC-sanctioned party was excluded from the block by validators. That number fell to around 66% in mid-December where it has largely hovered.