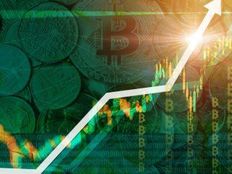 In the midst of a dreadful year for bitcoin and the broader cryptocurrency complex, HODLrs are looking for any bit of positive news that could support a bitcoin rebound in 2023.

If on-chain data proves accurate, help could be on the way for bitcoin and for crypto-correlated exchange traded funds such as the Invesco Alerian Galaxy Crypto Economy ETF (SATO ).

For the uninitiated, on-chain data analysis is the use of blockchain data to determine bitcoin users’ views on the market. Think of it as a sentiment indicator. There’s efficacy to this methodology because it evaluates both transaction data and how much is moving in and out of crypto wallets.

Interestingly, on-chain data brings security to bitcoin transactions. It’s what makes those transaction traceable. In fact, it was on-chain data that provided clues regarding the collapse of FTX.

“Bitcoin is a terrible asset for crime. It’s 100% traceable. Most other cryptocurrencies can also be traced. Within hours of the FTX hack in November, Kraken exchange said they had identified the hacker. On-chain analysis was also invaluable in November for monitoring exchange risk and the Capriole Fund used it to monitor FTX exchange reserves and protect investor assets,” according to Capriole Investments.

Regarding potential positives for bitcoin prices and ETFs such as SATO, Capriole highlights the scenario that started the run on FTX, including a Tweet from the chief executive officer of Binance. The research firm noted that the subsequent fallout “resulted in a rare deepening of Bitcoin value to on-chain fundamentals.”

Capriole also pointed out that in the wake of the FTX calamity, bitcoin miners, several of which reside in SATO, are capitulating. Those companies sold bitcoin reserves to raise capital, in turn sending the price of the largest digital currency below its electricity costs — a noteworthy scenario.

“Capriole’s Bitcoin Electrical Cost represents the cost to mine a Bitcoin based on the global average miner electrical cost of $0.05/kWh and with consideration of the mining hardware, depreciation and more,” noted Capriole. “It is incredibly rare for Bitcoin to trade below its Electrical Cost – a price point which has been a historical floor for Bitcoin.”

Bottom line: Bitcoin and its crypto counterparts remain embattled assets, and the FTX situation, which is ongoing, isn’t helping matters. However, on-chain data could be one sign that digital currencies and the related equities could be in for better things in 2023.

vettafi.com is owned by VettaFi, which also owns the index provider for SATO. VettaFi is not the sponsor of SATO, but VettaFi’s affiliate receives an index licensing fee from the ETF sponsor.