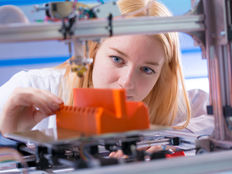 3D Printing and This ETF May Go Mainstream

Manufacturing is one industry that’s bringing 3D printing into the mainstream.

“3D printing technology is slowly cementing its role as a key part of the manufacturing mix, continuing its journey towards industry 4.0. It has already lowered the barriers to entry for manufacturing, allowing enterprises across many industries to respond to customer demands while offering greater customization of products and speed to market,” according to GlobalData research.

Data confirm that the 3D printing market is growing at an exponential rate, indicating PRNT has solid long-term potential.

“3D printing has leaped from the proof-of-concept stage to a viable manufacturing alternative, demonstrating its potential in real-world environments, notably in industries such as aerospace and defense, construction, consumer and automotive,” said Venkata Naveen, Disruptive Tech Analyst at GlobalData.

Healthcare, including dental, is one of many markets that could prove to be a potent catalyst for PRNT in the year ahead.

“The market for 3D printing in healthcare is growing rapidly, particularly for the manufacturing of medical devices. One of the greatest advantages of the technology is the freedom to produce custom-made and on-demand medical products and equipment. Moreover, the availability of open-source product designs is helping 3D printing startups to mass-produce essential medical equipment,” according to GlobalData.

Automotive is another arena ripe for 3D printing disruption.

“The automotive sector is ripe for 3D printing. Besides its extensive use for rapid prototyping, the technology is being used to produce parts such as tail lights, bumpers and parking brake brackets. The technology not only helps the aesthetic design of vehicles but also allows lower consumption of materials and wastage which is beneficial for all stages of manufacturing,” notes GlobalData.