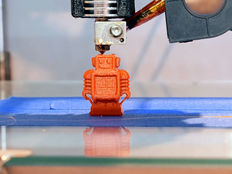 It has long been said that 3D printing investments, including the 3D Printing ETF (PRNT ), have increased exposure to the lucrative healthcare market. That thesis is being highlighted by 3D printing applications in the fight against the coronavirus.

PRNT debuted nearly three years ago as the first US-listed ETF dedicated to the 3D printing theme. The fund is one of two passively managed products from New York-based Ark Investment Management. ARK believes 3D printing will revolutionize manufacturing by collapsing the time between design and production, reducing costs, and enabling greater design complexity, accuracy, and customization than traditional manufacturing.

At a time when ventilators are in short supply, the Department of Defense researchers are using 3D printing to boost the supply of those devices.

“Developers from the Army Research Laboratory are collaborating with civilian partners to manufacture low-cost, emergency ventilators using 3D printers,” according to the Pentagon. “The handheld gas ventilator, dubbed the Illinois RapidVent, is roughly the size of a water bottle. Due to its size and portability, the ventilator may also be ideal for soldiers in the battle beyond the COVID-19 pandemic, said Tonghun Lee, a Champaign, Illinois-based ARL researcher.”

“Engineers at Aberdeen Proving Ground, Maryland, produced replacement parts for unmanned aerial and ground vehicles and weapons systems, such as components for a 40 mm grenade launcher, as early as 2014,” according to DoD.

Research and data have long suggested the healthcare arena could unleash a massive wave of growth for the 3D printing market, a thesis that’s routinely confirmed.

“Two big advantages of 3D printing are that it is quicker than older methods of production that require time-consuming and costly retooling to turn out a modified part, and 3D printing also allows complex parts to be manufactured that might be difficult to produce using other methods,” notes the Pentagon.

PRNT is higher by almost 7% over the past month and there could be more upside to be had here thanks to the healthcare market because the Food & Drug Administration (FDA) issued guidance for 3D printed medical devices, which could boost production.