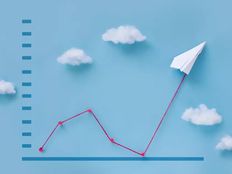 The tide appears to be turning for the ARK Innovation ETF (ARKK B+). After dropping in value "by more than 54% over the past year, ARK Invest’s flagship fund had its best week ever, rising nearly 26% for the week ending March 18.

The reversal of ARKK’s fortunes mirror that of other disruptive technology funds. Funds such as the Goldman Sachs Innovate Equity ETF (GINN A-) and the ALPS Disruptive Technologies ETF (DTEC A-) also recently experienced double digit returns after months of negative returns.

“While faster growing, less profitable companies were out of favor to start 2022, many of them rebounded sharply last week with loyal shareholders to ARKK being rewarded for sticking with the long-term-oriented strategy,” said ETF Trends’ head of research, Todd Rosenbluth.

The crown jewel of Cathie Wood’s stable of ETFs has also been bringing in the investor capital, having brought in $411.3 million in February. Earlier this month, Wood told CNBC’s Capital Connection that the firm has seen “significant inflows” since January 17.

“Given our expectations for growth in these new technologies, I think we’re going to see some spectacular returns,” added ARK Invest’s founding CEO and CIO. Data from ETF Database show that ARKK has drawn more than $1 billion in net inflows year-to-date.

ARKK is an actively managed ETF that invests at least 65% of its assets in companies relevant to the investment theme of disruptive innovation. ARK defines “disruptive innovation” as the act of introducing a technologically enabled new product or service that potentially changes how the world works. This includes companies that rely on or benefit from the development of technological improvements and advancements in scientific research relating to the areas of DNA technologies and the “genomic revolution”; automation, robotics, and energy storage; artificial intelligence and the “Next Generation Internet”; and fintech innovation.