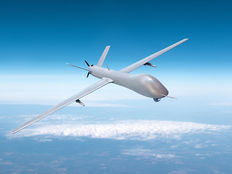 The Russian war on Ukraine entered a new phase this week, with Ukraine launching a retaliatory drone attack deeper inside Russian than it had previously reached. Drones have defined the war this year in a way they have not in prior wars, drastically increasing interest and attention towards aerospace firms which may be available in an aerospace ETF.

As such, investors interested in how the increased demand for drones can push the industry forward might want to consider a strategy like the ARK Space Exploration & Innovation ETF (ARKX ). The actively-managed strategy invests in global firms that look for innovative firms within the aerospace sector or those that would benefit from aerospace advancements in spaces like robotics, AI, 3D printing, and more.

ARKX holds two of the most notable dronemakers in the world in its top four holdings by weight. ARKX holds AeroVironmnet Inc., (AVAV) at 6.9% and Kratos Defense & Security Solutions Inc., (KTOS) at 6.16%.

AVAV designs, engineers, and manufactures unmanned aircraft and systems. Having missed in its recent earnings call, it could present a buy low opportunity with 12% per annum growth projected for the next three years compared to just 6.6% for the broader aerospace and defense industry.

KTOS, meanwhile, is currently developing one of the world’s few full stealth drones, the XQ-58A Valkyrie drone, on top of winning a $174 million U.S. Navy contract in September 2022.

With Russia continuing to hold Ukrainian territory in the eastern Luhansk and Donetsk regions, a diplomatic solution unfortunately seems a ways away. Until peace can be achieved, drones will continue to play a key role in the war there, and are poised to play an even larger role for militaries around the world in the coming years. As such, investors may want to track an ETF like ARKX in the near term and in the months ahead as attention to the space continues to grow.