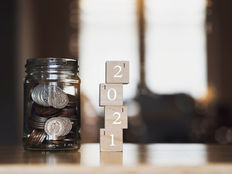 It’s now the largest actively managed exchange traded of any variety, and its one of the best-performing ETFs this year, active or passive. The ARK Innovation ETF (ARKK ) didn’t get here by chance.

ARKK is often highlighted for being an early ETF advocate for Tesla (NASDAQ: TSLA ). The case for Tesla upside remains strong because of continuous advancements in EV.

“Electric vehicles may cost about the same as their gas-guzzling brethren in just three or four years — and only get cheaper from there,” reports David Baker for Bloomberg.

ARKK Is Not Slowing Down

Among ETFs that aren’t dedicated sector funds, ARKK has the positioning to capitalize on this evolving industry.

High EV prices are also falling. Companies like Tesla are looking to introduce entry-level models to make them more financially accessible to consumers, which could help spur demand and further boost the industry.

“Electric cars and buses, which are key to fighting global warming, have long been saddled with bigger up-front costs than those burning gasoline or diesel, due to the cost of batteries. But researchers say that price premium will disappear once battery packs reach $100 per kilowatt-hour — a tipping point BNEF expects to occur in 2023, according to its 2020 Battery Price Survey,” according to Bloomberg.

Furthermore, due to the increased concerns over environmental issues, global governments are supporting the development of electric vehicles worldwide. Consequently, the high voltage battery market will continue to enjoy increased interest and investments as electric vehicles is expected to drive the growth.