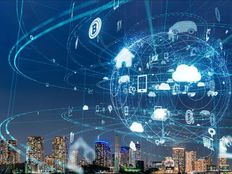 Fintech stocks and exchange traded funds, like other assets with the disruptive growth label, are slumping this year, but some analysts remain constructive on next-generation financial stocks.

Should that positivity prove worth embracing, investors considering the ARK Fintech Innovation ETF (ARKF B-) could be rewarded.

Last week, Wells Fargo analyst Jeff Cantwell launched coverage of 14 fintech stocks, including some ARKF components, with “outperform” ratings on all of those names. The analyst sees five themes driving fintech growth. Those include digital payments, “the cloud-based as-a-service model for account processing, fraud protection, e-wallets, and other services; consolidation, and the emergence of cryptocurrency,” reports Eric Savitz for Barron’s.

Among the fintech stocks Cantwell is bullish on are Block (NYSE:SQ) and Shopify (NYSE:SHOP). Those are ARKF’s largest and third-largest holdings, respectively, combining for almost 21% of the actively managed ETF’s roster.

The analyst also likes Dutch fintech firm Adyen (ADYEN), which accounts for almost 4% of ARKF’s roster. Cantwell also has an outperform rating on Bill.com (BILL). That’s ARKF’s 15th-largest component at a weight of almost 2.27%. Toast (TOST), which accounts for almost 2% of the ARKF roster, is also rated “outperform” by the Wells Fargo analyst. Cantwell adds that there’s massive revenue growth potential in the fintech space.

Adding to the case for ARKF is that amid the aforementioned slump by disruptive growth stocks this year, some corners of the space are inexpensive. That rarely happens, but that’s the case today when it comes to fintech names.

“Low valuations boost the appeal. The group trades at about 5.5 times the next 12 months’ sales and 16 times earnings; multiples have compressed significantly over the past six months. The group is trading at a discount to the S&P 500’s 20 times expected 2022 profits and 18 times projected 2023 profits, he adds. But this discount won’t last forever, he (Cantwell) says, so investors should grab them now,” notes Barron’s.