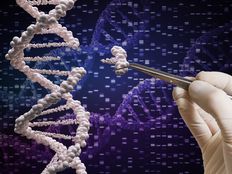 2022 hasn’t been a great year for all kinds of tech stocks, and certainly biotech has taken its fair share of lumps as interest rates have continued to dry up funding. That hasn’t stopped the innovation that makes biotech such an appealing space, however. There are still significant steps forward being taken in genetics and other biotech sectors that could drive growth for firms, with one such company accessible in the active biotech ETF, the ARK Genomic Revolution ETF (ARKG A-).

The ETF holds recently-upgraded firm Beam Therapeutics (BEAM) at 4.2%, its fifth-largest weight, and may stand to benefit from its reportedly strong pipeline. The company, which specializes in research on gene therapies and genome editing, received a buy rating from Citi thanks to its gene editing platform, prospects expected next year thanks to research on gene editing, and $1 billion in cash on hand.

BEAM also broke above its 50-Day Simple Moving Average on December 13, hitting $45.74 per share on the positive news regarding its plans and the progress of its gene editing research. While still some way from its $49.35 200-Day SMA, it may yet be able to turn the tables, though Tuesday’s price swing also displays some volatility.

ARKG is one of a select few ETFs dedicated to disruptive innovation in biotech, actively investing in biotech firms that would benefit from advances in genetics as well as molecular diagnostics and stem cell advances. Charging 75 basis points, the ETF has produced an annual dividend yield of 1.07%, outdoing the ETF Database Category Average and FactSet Segment Average of 0.36% and 0.3% respectively.

While it hasn’t been the easiest of years for ARKG itself, its flows have picked up of late, up by about $27 million on net from its one-month net flows to its five-day net flows. Should BEAM be able to make good on its pipeline and prospects, driven by some potentially powerful genetics research, ARKG could be the right active biotech ETF for investors hoping equities rebound as inflation cools off next year.