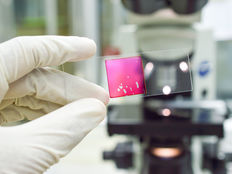 Cancer remains one of the leading causes of death around the world, but advancements in genomics are enhancing detection and screening capabilities.

For investors, that puts the ARK Genomic Revolution Multi-Sector Fund (ARKG A-) at the forefront of vital healthcare developments. Advancements in cancer screening are also part of the broader sustainable investing conversation, indicating the ARK exchange traded fund could check that box for investors too.

The early diagnosis of cancer can dramatically improve patient outcomes.

“If diagnosed early, cancer often is manageable. In the US, more than 80% of the deaths occur in patients whose cancer already has metastasized prior to the diagnosis,” writes ARK Invest Director of Research Brett Winton. “Researchers estimate that blood tests that diagnose early-stage cancer could reduce the overall cancer mortality rate by more than 25%.”

As Winton notes in the paper, healthy economics is a broad theme and one that intersects with myriad disruptive technologies. In addition to genomics, themes ranging from 3D printing to automation to the Internet of Things (IoT) have places in healthy economics.

ARK even lays out a case for cryptocurrency’s role in this part of the sustainability equation. Industrial innovations are at the center of genomics advancements – something ARKG arguably better-captures than rival funds.

“Paired with advances in machine learning and synthetic biology, cost declines in next generation sequencing are likely to make such blood tests a reality,” notes Winton. “Traditional imaging diagnostics, such as CT-scans and bronchoscopies, require significant capital expenditures but are useful only for the diagnosis of certain cancers.”

Some ARKG components are also at the forefront of liquid biopsies, a form of cancer testing once viewed as too expensive for widespread using. Fortunately, those costs are declining, potentially leading to earlier detection for patients.

“In 2015, a state-of-the-art liquid biopsy pan-cancer test would have cost health systems a prohibitive $30,000,” says Winton. “According to our research, in the past year, advances in next generation sequencing, machine learning, and synthetic biology have pushed the costs down to the $1,500 range, similar to those of traditional imaging techniques. Within the next five years, ARK anticipates that liquid biopsy costs could fall by roughly 80%.”