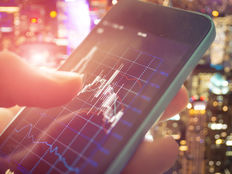 The FAANG stocks – Facebook, Apple, Amazon, Netflix, and Google – always command plenty of attention, but there are other avenues for investors looking to capitalize on next-generation technological themes, some of which are accessible via the SPDR S&P Kensho New Economies Composite ETF (KOMP).

KOMP seeks to provide investment results that, before fees and expenses, correspond generally to the total return performance of the S&P Kensho New Economies Composite Index.

KOMP’s underlying index “is designed to capture companies whose products and services are driving innovation and transforming the global economy through the use of existing and emerging technologies, and rapid developments in robotics, automation, artificial intelligence, connectedness, and processing power,” according to State Street.

Despite being light on the FAANGs, KOMP is performing well this year.

“Four percent of the stocks in KOMP are up over 100% year to date, versus zero in the S&P 500 — a startling feat for the innovation-focused strategy, given the March market drawdown. And since the market bottom, those numbers are even greater,” writes Matthew Bartolini, Head of SPDR Americas Research, State Street Global Advisors.

With growth stocks outperforming and the economy starting to shown signs of life, KOMP is relevant in the current environment.

“As reopening and rebuilding begin, new industries will be created and current ones will work to adjust to a new sociological paradigm,” according to Bartolini. “This inflection point may present opportunities that are not currently well represented in traditional market exposures. Understanding which ETFs are part of a NextGen trend, how their innovative portfolios are constructed and their impact when including within a broader allocation are all key considerations when seeking to harness the societal change we are witnessing — and will likely witness for generations to come.”