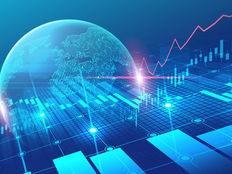 The Israeli equity market is crossing some notable milestones, and that could spark interest in related exchange traded funds, including the ARK Israel Innovative Technology ETF (IZRL B+).

“The total value of the companies traded on the Tel Aviv Stock Exchange (TASE) passed above the one trillion shekel threshold last month, according to the TASE summary for September,” reports Aviv Levy for Globes.

Based on current exchange rates, one trillion shekel equals about $310.1 billion. That’s not a massive amount in U.S. equity market terms — plenty of S&P 500 member firms are worth more than that — but that figure is a testament to the rise of the Israeli equity market.

The increasing prominence of Israeli stocks on the global stage is led by the country’s technology sector. In fact, Israel is one of the most tech-forward markets in the world outside of the U.S. and some Asian economies. IZRL taps into that theme with an almost 48% weight to tech stocks, nearly double its second-largest sector allocation.

“In global terms, the rise in the total value of companies traded on the TASE has seen it overtake the capital markets of Iran, Vietnam and Poland and it remains just behind Malaysia, Mexico and Indonesia,” according to Globes.

Israel’s ascent in market capitalization terms is relevant because as country’s market cap grows, it will become a bigger slice of major developed markets indexes, such as the MSCI EAFE Index. Today, Israel remains a small sliver of the MSCI EAFE Index and comparable benchmarks, confirming that a fund like IZRL is perhaps the best way for investors to access Israel in basket form.

A couple of things are clear. IZRL is very much a growth fund, and it doesn’t rely on large-caps to deliver that growth. At the end of the second quarter, IZRL’s large-cap exposure was just 8.8%, less than the 11.4% that the fund devotes to micro-cap stocks. Additionally, Israeli stocks have impressive history on their sides.