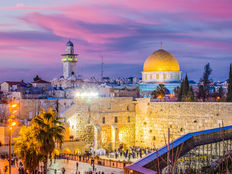 When it comes to combing the technology sector and international investing, many investors’ first thought is to look to Asia or emerging markets. However, less volatile Israel, accessible via ETFs, such as the ARK Israel Innovative Technology ETF (IZRL B+), could prove to be better bets.

IZRL, one of two passively managed ETFs from ARK Investment Management, reflects the performance of the ARK Israeli Innovation Index, which is comprised of Israeli companies whose main business operations are causing disruptive innovation in the areas of genomics, health care, biotechnology, industrials, manufacturing, the Internet or information technology, according to the issuer.

In addition to international and technology exposure, IZRL checks some other boxes, including the growth and size factors. The fund’s holdings have a weighted average market capitalization of $2 billion, putting it in small-cap territory.

The targeted focus on Israel’s innovators may be a way for investors to bolster a diversified global portfolio that may be severely underweight this segment of the international markets. Israel was promoted to developed market status in 2010 but many portfolios underweight the country relative to growth and innovation projections, with the country only representing 0.14% of the MSCI World Developed Index However, Israel is ranked 2nd overall for innovation by the 2017 Global Competitiveness Index and is a global leader in the development and marketing of new products and services, technological improvements, and advancements in scientific research.

Buoyed by robust technological innovation, Israel is home to a surging economy and favorable demographic traits.

At least 16 global financial service firms like Visa and MasterCard have opened research and development centers, and banks like Barclays and JP Morgan have established innovation incubators in Israel.

Home to 43 stocks as of the end of the third quarter, IZRA allocates 52.1% of its weight to the technology sector and nearly a quarter of its roster to healthcare names. The industrial and communication services sectors combine for nearly 18% of the fund’s weight.

Despite some recent political volatility, the tech-rich Israeli economy is expected to post GDP growth of 3% this year.

IZRL is up 23.43% year-to-date and is beating the MSCI Israel Index by about 500 basis points.