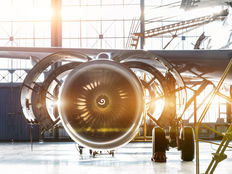 It hasn’t been the easiest of years for investing in tech, with megacap tech firms in particular taking a lot of hits in the broad market selloff. Longer term disruptive tech investing, meanwhile, could present an interesting opportunity in firms like L3Harris (LHX), a defense industry company that has made some notable buys in its ongoing post-merger reorganization. For investors looking for such a play, a defense industry ETF like the ARK Space Exploration & Innovation ETF (ARKX ).

L3Harris recently made a deal to buy Aerojet Rocketdyne (AJRD) for $4.7 billion, a move that adds AJRD’s hypersonic and electric propulsive systems capacity to LHX’s focus on surveillance solutions, microwave weaponry, and electronic warfare as well as its space & airborne systems. LHX itself is the result of a merger between L3 Technologies and Harris Corporation in 2019.

LHX may have recently missed on its earnings in the third quarter, but it is relatively undervalued compared to some of its rival defense industry stocks, and still maintains an upside potential of 35.3% according to one Morgan Stanley analyst earlier this week. The stock actually received an upgrade last week, as well, just as rival Lockheed Martin (LMT) was downgraded.

ARKX charges 70 basis points for its exposures, having launched just last March. The defense industry ETF actively invests in firms that could benefit from advancements not only in defense industry tech like orbital and suborbital aerospace machinery, but also space exploration-related technology like robotics, AI, 3D Printing, and energy storage.

The ETF has seen its net flows increase somewhat in recent weeks, from $25.6 million in net outflows over six months to just -$2.5 million in net outflows over the last month. Its active investment has also seen its performance increase relative to its ETF Database Category Average and the FactSet Segment Average, closing the cap over the last month.

Investors may rightly be concerned by tech investing given its struggles in the last year and the Fed’s ongoing rate hikes. Still, there is a place for a long term exposure to disruptive tech in investors’ portfolios, and ARKX is one to watch with its LHX exposure in the coming weeks.