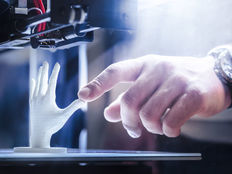 A few years ago, the 3D printing theme was scorching hot. Then it wasn’t. Today, it feels like many investors have forgotten about this disruptive technology, but with many market participants glossing over 3D printing, that could be a positive sign for the 3D Printing ETF (PRNT ).

PRNT debuted nearly three years ago as the first US-listed ETF dedicated to the 3D printing theme. The fund is one of two passively managed products from New York-based Ark Investment Management. ARK believes 3D printing will revolutionize manufacturing by collapsing the time between design and production, reducing costs, and enabling greater design complexity, accuracy and customization than traditional manufacturing.

With applications growing for 3D printing, the market is expected to expand in an exponential fashion, indicating the time could be right to revisit PRNT.

“3-D printing—or additive manufacturing—is making gains in some unusual places, aided by artificial intelligence and the explosion of low-cost computing power to help the technology compete with traditional production methods such as casting or forging,” reports Al Root for Barron’s.

PRNT is potentially useful for investors because many of its components are enterprise-driven, not consumer-facing companies. In 3D printing, the former is the more advantageous trait.

“It’s impressive and expensive. That’s one reason 3-D metal technology penetration has been slower than the most bullish investors hoped for years ago. It’s still far easier to cast metal parts in a traditional foundry. That’s limited 3-D metal printing gains to the aerospace industry where low volumes along with high costs and complexity are considered standard operating procedure,” according to Barron’s.

Related: U.S. Army Could Use Robots to Haul Ammunition

As regulatory guidelines become clearer, healthcare is expected to be a major market for 3D printing products and services in the years ahead.

“3-D metal printing, as a result of the improvements, is making headway into more industries. Artificial hips and knees can be printed,” reports Barron’s. “Health care is another industry characterized by low volume, highly technical products.”