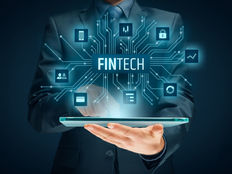 Investors often view fintech companies as new frontiers in the financial services realm and that’s true. However, many of the companies residing in exchange traded funds such as the ARK Fintech Innovation ETF (ARKF) are making inroads into arenas previously dominated by traditional banks and other lenders.

A prime example of that trend is small business loans, a segment where Square (NYSE: SQ), ARKF’s largest holding, is rapidly becoming a dominant force. That much is seen through the government’s Payroll Protection Program (PPP) where fintech companies are pilfering smaller loan business from big banks.

" “Kabbage, an Atlanta-based fintech, has lately positioned itself as an SBA lender for the PPP program, which aims to provide loans to small businesses struggling in the Covid-19 recession,” reports Luisa Beltran for Barron’s. “It is partnering with 135 community banks and has processed 209,000 PPP loans, valued at more than $5.8 billion, as of July 1, according to the company. Kabbage directly funded more than half, or 55%, of the loans, while Customers Bancorp (ticker: CUBI) funded 23%, and 22% went through Cross River Bank.”

The size of the loans processed by Square relative to traditional banks isn’t important. What is important is that ARKF’s largest holding filled a void old school banks could not did not want to fill themselves.

Highlighting the potency of ARKF, it’s holdings are thriving due in part due to PPP exposure while big traditional banks face a slew of headwinds despite focusing on higher end PPP loans.

“Big banks have been criticized for prioritizing larger clients seeking big loans during the first round of the PPP, leaving out many small businesses. To address this, the SBA in April approved several fintechs to provide loans at the end of the program’s first round, including Kabbage, Square (SQ), PayPal Holdings (PYPL), Intuit (INTU), and OnDeck,” according to Barron’s.

Square, Paypal and Intuit combine for about 16% of ARKF’s weight. Not surprisingly, fintechs’ technology exposure gives the companies an advantage over old school banks.

“For example, Kabbage estimates it has put $1 billion over time into its technology to impressive results. Over 75% of its PPP applicants were processed without human intervention or manual review,” according to Barron’s.