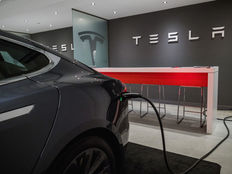 The ARK Innovation ETF (ARKK ) is often hailed for its large weight to Tesla and as an actively managed fund, which implies prescience on the part of the fund’s managers.

Tesla recently vaulted into the four-digit club, boosting ARKK along the way, but upstart Nikola Motor Corp. is gaining plenty of fanfare in the electric vehicle space even though it’s not currently producing any automobiles.

High-flying Nikola is looking to encroach upon Tesla’s plans to enter the electric pickup truck market, but the new company may be at a cost disadvantage right out of the gate.

“Founded to develop hydrogen fuel cell class 8 trucks, Nikola Motor Corporation made headlines this past week as its stock debuted via reverse merger and hit a $30 billion market cap, even though it has not produced one truck,” said ARK analyst Sam Korus in a recent note. “Nikola aims to lower the cost of trucking. ARK’s research suggests, however, that hydrogen trucks will have a higher total cost of ownership than their battery-electric alternatives.”

A Truck Costs How Much?

Some market observers expect Nikola to target truck buyers previously loyal to models such as the popular Ford F150 and related fare, which usually cost between $30,000 and $40,000. However, Nikola is well off that mark.

“While hydrogen costs and hydrogen drivetrain inefficiencies are key to the difference between hydrogen fuel and electric truck costs, perhaps the more important competitive obstacle will be the infrastructure for hydrogen refueling which is an order of magnitude more expensive than charging stations for battery electric vehicles,” notes Korus. “Assuming incorrectly that most trucks max out on weight before running out of trailer space, advocates for hydrogen fuel cell trucks often claim that the weight of the batteries will limit the freight an electric truck can transport.”

As for ARKK and its large Tesla exposure, it’s unlikely the fund will be crimped by the efforts of a new rival, particularly at the aforementioned lofty price points.

“ARK will be surprised if Nikola ever delivers a single fuel cell truck,” said Korus.