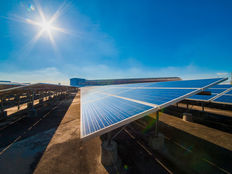 The market’s savage repudiation of oil could have an unintended, though positive impact: more spotlight on alternative energy ETFs, such as the previously high-flying ALPS Clean Energy ETF (ACES).

ACES is at the right place at the right time. Not only is clean energy consumption increasing, but costs are also decreasing, which in turn bolsters adoption. Additionally, coal production is slumping, adding to the virtuous cycle for alternative energy ETFs.

“The International Renewable Energy Agency, or IRENA, issued the report the same day that futures prices for West Texas Intermediate crude plummeted into negative territory for the first time ever as markets sapped of demand by the coronavirus pandemic remain awash in oil,” according to S&P Global Market Intelligence.

“Calling on governments to design pandemic rescue and stimulus packages that accelerate decarbonization efforts, IRENA presented a scenario for cutting 70% of energy-related carbon dioxide emissions globally by 2050, primarily through using renewables and energy efficiency and a sharp reduction in fossil fuel consumption,” according to S&P Global Market Intelligence.