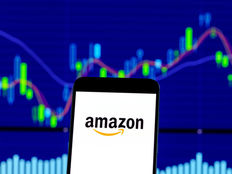 Amazon.com Inc. (AMZN) is, once again a story stock, getting a major boost from the staying at home and working from home trends foisted upon America by the coronavirus. With Wall Street expecting more upside from the e-commerce giant, ETFs such as the ARK Web x.0 ETF (ARKW ) stand to benefit.

Amazon is one of ARKW’s top 10 components, which is meaningful because some analysts are forecasting even more upside for the high-flying stock.

Goldman Sachs analyst Heath Terry “repeats his Buy rating on the stock, and lifts his price target to $2,900, from $2,600. At the top of the range, the company would be worth $1.44 trillion, and surpass the value of Microsoft (MSFT) at $1.33 trillion to be the most valued company on Earth,” reports Eric Savitz for Barron’s.

What makes ARKW a more compelling option than passively managed funds is that with the benefit of active management, the fund goes beyond prosaic fares, such as Alphabet, Amazon, and Facebook. For example, Tesla is ARKW’s top holding, and the fund features exposure to the likes of Square and Roku, stocks not often found for size in traditional internet ETFs. Roku, ARKW’s third-largest holding, could be a significant driver of the fund’s upside potential due to the burgeoning OTT market.

Still, Amazon exposure is meaningful for the actively managed ARKW.

“The market continues to underestimate the long term value of the Amazon platform as the leader in both the movement of retail online and compute into the cloud, the realization of which is being accelerated by the current crisis along with consumer and enterprise adoption,” said Terry.