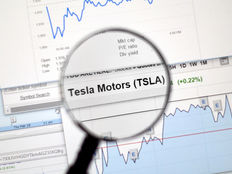 Tesla (TSLA) was one of the first quarter’s star stocks and some market observers believe this is a case of the coronavirus highlighting the advantages of pollution reduction, a scenario that could benefit the  ARK Innovation ETF (ARKK ).

Along with some of its ARK stablemates, ARKK is among the largest ETF owners of Tesla stock and also has deeper reach into the electric vehicle ecosystem.

“Even in March, as pandemic lockdowns swept the globe, sales of battery-powered vehicles—including plug-in hybrids—surged in France, Germany, the Netherlands, Sweden, and the UK, according to a new report from Bloomberg New Energy Finance

Regarding ARKK, think about a specific situation for a moment. That being all the before and after pictures of various cities since COVID-19 hit. The before photos typically show significant air pollution while the after snapshots show clear skies.

The point is supporters of electric vehicles are using those pictures to illustrate the benefits of EVs in a post-coronavirus world and that could be a positive for ARKK.

“Many brands have pushed electric vehicles more aggressively in recent months and held back some 2019 orders so that they would count towards 2020 mandates, according to BNEF analyst Colin McKerracher,” reports Bloomberg. “Drivers in Europe’s three largest car markets — Germany, France, and the UK — bought 46,052 electric vehicles as the pandemic deepened in March, almost double the amount in the year-earlier period.”

“The coronavirus has underscored the environmental damage of vehicle emissions. COVID-19 fatality rates have been linked to air quality. Sheltering restrictions and lockdowns have emptied once-busy streets and idled industrial factories, resulting in cleaner air in some of the world’s densest, dirtiest cities,” according to Bloomberg.