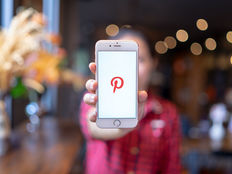 With so many states having issued quarantine orders as the United States and globe struggle to contain the rapid spread of the coronavirus pandemic, social media has been the beneficiary of this unprecedented change.

Shares of Pinterest (PINS) rocketed as much as 13% Tuesday in after-hours trading after the company issued early guidance for its fiscal first quarter that bested analysts’ expectations.

The company projects revenue for its first quarter in the range of $269 million to $272 million. Meanwhile, a FactSet survey of analysts who did update numbers in the past month placed projected revenue at $252 million, a number that Pinterest beat handily.

“First-quarter revenue performance was consistent with our expectations through the middle of March when we began to see a sharp deceleration. Fortunately, despite weakness across nearly the entire advertising market, our exposure to some of the most affected segments like travel, automotive, and restaurants has not been significant,” the company said.
Pinterest’s global monthly active users also grew in its first quarter. The company said it expects between 365 million to 367 million global active users, compared to FactSet’s consensus estimate of 353 million.

Pinterest also said it will report first-quarter earnings on May 5.

Pinterest noted that it closed Q1 with $1.7 billion in cash, cash equivalents and marketable securities, no financial debt, and an undrawn $500 million revolving credit facility.

However, Pinterest withdrew its full-year guidance last week because the COVID-19 pandemic has been impacting its global advertising revenue.

“In light of the rapidly evolving and unpredictable effects of COVID-19, Pinterest is currently not in a position to forecast the expected impact of COVID-19 on its financial and operating results for the remainder of 2020. As the COVID-19 pandemic has continued to unfold, it has impacted Pinterest’s advertising revenue globally,” the company said in a press release.

While Facebook’s (FB) 2% advance didn’t make them the only technology company to see gains on Tuesday, the social media giant which owns Instagram, which is seeing substantial social media interaction due to the coronavirus.