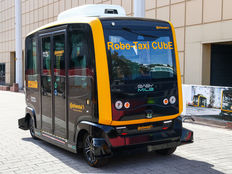 Traditional transportation is, well, traditional, and that makes it vulnerable to some of the purveyors of disruptive technologies found in the ARK Innovation ETF (ARKK ).

Now the largest actively managed equity-based exchange traded fund by assets, ARKK is at the epicenter of what’s likely to be long-term, seismic disruption in the old guard transportation arena.

“Robotaxis could reduce the cost of point-to point-mobility discontinuously in the US, stealing $150 billion in annual demand per year from ride-hailing, short-haul flights and public transit,” notes ARKK Analyst Tasha Keeney.

Investors who are looking for up-and-coming opportunities should consider the developing smart transportation industry and an exchange traded fund strategy to tap into this quickly evolving segment. ARKK checks those boxes.

“If robotaxis become the dominant form of urban transit, ARK expects US auto sales to drop from 17 million units today to roughly 10 million by the end of the decade,” according to Keeney.

On a cost basis alone, new transportation alternatives will likely prove attractive to consumers. Automobiles are also expensive. U.S. car owners would on average spend $1,000 per month to own, operate, park and insure a vehicle. Meanwhile, the world’s appetite for car ownership has not waned.

“In our view, autonomous electric technology will cause a tidal wave of disruption not only in the auto industry but in many other industries,” writes Keeney. “If battery system costs decline, we believe electric vehicle prices will follow, triggering mass market adoption. At the same time, autonomous driving systems could boost the utilization and lower the cost of transportation dramatically. ARK’s research shows that robotaxis could cost consumers just $0.25 per mile, less than half the cost of driving a personal car, half the cost of a short flight, and at a cost close to many public transit modes.”