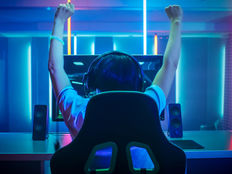 Up almost 41% year-to-date, the Roundhill BITKRAFT Esports & Digital Entertainment ETF (NERD) is one of 2020’s best stories in the thematic ETFs universe.

NERD seeks to track the total return performance of the Roundhill BITKRAFT Esports Index, which tracks the performance of the common stock of exchange-listed companies across the globe that earn revenue from electronic sports, or esports related business activities. Data continue confirming the robust growth expectations associated with esports.

“Video game spending in the US reached its highest point since 2010, according to a new NPD Group report, with sales through June reaching $6.6 billion on hardware, software, and accessories. It’s the highest total for the first six months of the year since spending hit $7 billion a decade ago,” reports Chaim Gartenberg for The Verge.

“Spending has been dramatically higher in 2020 than it was compared to last year, with sales through June up 19 percent year over year, and June sales specifically were up 26 percent compared to the same month in 2019,” according to The Verge. “While NPD’s numbers don’t cite a specific reason for the boost in sales, it’s hard not to draw the conclusion that a major contributing factor was the spike in video game playing caused by millions of people having a sudden boost in free time thanks to COVID-19 shutdowns.”

With more people stuck at home, many have turned to video gaming to pass the time, potentially bolstering the outlook for a video game-themed ETF strategy such as NERD. Plus, the looming console upgrade cycle could propel NERD later this year.

“It’s not the first record 2020 has set for video game sales, either: US spending hit an all-time quarterly record earlier this year. And with new consoles on the way in the fall from both Microsoft and Sony (in the form of the Xbox Series X and PlayStation 5) to boost hardware sales, 2020’s record-setting run may be far from over,” reports The Verge.