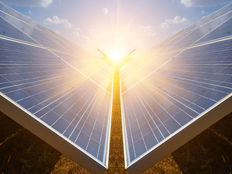 Solar stocks and sector-related ETFs have shined over the past year and the outlook continues to look bright.

The outlook for the solar industry remains favorable as strong fundamentals could continue to back the sector, MarketWatch reports.

“Global solar installations will continue double-digit growth rates into the new decade,” IHS Markit said in a recent note. “New annual installations in 2020 will reach 142 gigawatts (GW), a 14 % rise over the previous year.”

“Solar demand in 2020 will be lower than historic installation peaks of 50 GW in 2017,” IHS Markit added. “Demand in China is in a transitional phase as the market moves towards solar being unsubsidized and competing with other forms of generation and there is some lingering uncertainty while awaiting the release of the new 14th Five-Year Plan to be announced next year.”

The Solar ETF could be well positioned to capitalize on this shift to cleaner energy. Specifically, TAN’s underlying portfolio includes a large 23.2% tilt toward Chinese companies, along with a hefty 46.0% position in U.S. names.

In the U.S., increased corporate adoption of solar panels and an increased number of states pushing utilities to go green could also support the case for the solar industry outlook.

In the U.S., “installations are expected to grow 20% in 2020, consolidating the United States’ position as the world’s second largest market. California, Texas, Florida, North Carolina and New York will be key drivers of U.S. demand growth over the next five years,” according to Markit.