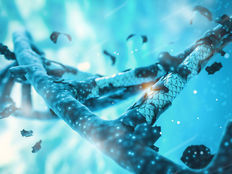 Take the CRISPR Call With This Genomics ETF

Investors looking for access to CRISPR gene editing technologies should consider the ARK Genomic Revolution Multi-Sector Fund (ARKG ), one of the ETFs best-positioned in this fast growing arena.

Looking ahead, CRISPR-based innovations to accelerate given the technology’s ease of use, cost-efficacy, growing body of research surrounding its safety, and AI-powered CRISPR nuclease selection tools. CRISPR could also be utilized to address some of the most prominent healthcare problems, which opens up a significant investment opportunity in monogenic diseases.

“According to three recent independent studies, CRISPR Cas9 – a novel gene-editing technology – could cause unintended changes, or off-target effects, to the human genome. Among them are gene deletions or unusual rearrangements of chromosomes, with unknown consequences,” writes ARK Invest analyst Ali Urman in a recent note.

ARKG includes companies that merge healthcare with technology and capitalize on the revolution in genomic sequencing. These companies try to better understand how biological information is collected, processed and applied by reducing guesswork and enhancing precision; restructuring health care, agriculture, pharmaceuticals, and enhancing our quality of life.

CRISPR, biotech’s breakthrough of the century, will have a profound impact on the world’s most salient health and medical issues, especially as its toolbox expands.

Last week, “the FDA rejected BioMarin’s (BMRN) gene therapy for Hemophilia A, a severe chronic bleeding disorder, and requested more data, perhaps out of concern that off target effects could jeopardize patient safety. As a result, BioMarin’s potential cure could face a two-year delay, giving other pre-clinical Hemophilia A trials like Intellia Therapeutics’ (NTLA) an opportunity to catch up,” writes Urman. “CRISPR Cas9’s potential is monumental. That said, regulators will have to standardize testing to identify off target effects and maximize its safety profile.”