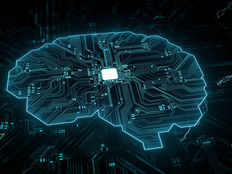 Over the course of its nearly seven years on the market, the vaunted ARK Innovation ETF (ARKK B+) has often been viewed as a “Tesla ETF” due to its consistently holding one of the largest weights to Elon Musk’s electric vehicle juggernaut among ETFs.

Indeed, ARKK has a 10.57% weight to Tesla, which is nearly 500 basis points above the weight assigned to its second-largest component. Given ARKK’s exposure to myriad emerging technologies, including artificial intelligence (AI), the fund’s Tesla weight is meaningful.

In fact, the automobile maker’s recent AI day highlights the company’s vast AI ambitions and how it plans to make them realities.

“At AI Day, an event focused on recruiting top artificial intelligence talent, Tesla unveiled an ambitious plan to complete the vertical integration of every component of its hardware and software stacks, from silicon, training cluster and compiler to driving simulation,” according to ARK Invest research.

Essentially, Tesla is aiming for vertical integration. While it’s already one of the most integrated automobile makers, Tesla is angling to bring the data-labeling process and self-driving computers in-house.

That would add to its robust integration, which already includes neural networks, battery design, manufacturing and charging stations, among other concepts. At the aforementioned AI day, Tesla revealed plans for Dojo, an AI-driven supercomputer that could rival or surpass today’s top supercomputers.

“Dojo is centered around the D1, an application-specific chip (ASIC) designed from the ground up specifically for AI training, optimizing for low latency and high bandwidth. With System-on-Wafer packaging technology similar to that of Cerebras, Tesla combines 25 D1s on a single training tile for a whopping 9 petaflops of compute,” adds ARK.

Enhancing its vertical integration could keep Tesla away from thorny production issues, such as chip shortages, which are hampering the auto industry this year.

“We believe that by owning the AI stack – from training silicon to labeling to neural network design – Tesla should be able to iterate much faster than the competition. Not hostage to third parties shipping chips or fixing bugs, Tesla will be in full control,” concludes ARK.

Year-to-date, investors added $5.92 billion to ARKK, the largest actively managed ETF by assets. ARKK is one of three ETFs featuring Tesla as the largest holding.