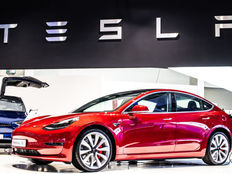 Investment firm Canaccord Genuity gushed over electric carmaker Tesla by raising its price target by more than $100 as they expects the trend toward electric vehicles “will only accelerate in 2020.” This casts a spotlight on ETFs focused on electric vehicles like the Global X Autonomous & Electric Vehicles ETF (DRIV).

Per a Yahoo Finance report, the price “target was raised to $515 from $375, one of the highest on Wall Street and near the Street-high view of $530. The average price target is about $302, according to Bloomberg data.”

“While bears have feared demand issues as a function of tax credit expiration for Tesla, we suspect a solid Q4 combined with the robust Q3 should put these fears to rest,” said Canaccord analyst Jed Dorsheimer.

Canaccord’s optimism was shared by JMP Securities, who said that “unit consensus expectations for this year are oddly low.” Of course, not everyone is feeling all charged up about Tesla.

“Excluding the Netherlands and China, we expect Model 3 deliveries to be down” analyst Jeffrey Osborne wrote in a note dated Dec. 29, citing “demand saturation” in the most developed markets.

seeks to provide investment results that correspond generally to the price and yield performance, before fees and expenses, of the Solactive Autonomous & Electric Vehicles Index.

For a less direct play on electric vehicles, investors can also look at the Global X Lithium & Battery Tech ETF (LIT B-). Lithium-ion battery capacity is vital because one of the primary factors car buyers consider when evaluating electric vehicles is how long those vehicles can run on a single charge. Tesla’s dominance in the booming electric vehicle market will also move the demand for lithium.

The underlying index is designed to measure broad-based equity market performance of global companies involved in the lithium industry. One of the oldest thematic ETFs, LIT is designed to provide exposure to “the full lithium cycle, from mining and refining the metal, through battery production,” according to Global X.