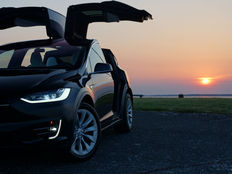 Tesla’s meteoric rise continued Monday as shares of the electric vehicle maker flirted with $1,800 for the first time, lifting ETFs heavy on the stock in the process. That includes the ARK Autonomous Technology & Robotics ETF (ARKQ ).

With its 16.23% weight to Tesla, ARKQ is benefiting in significant fashion as highlighted by a year-to-date gain of almost 38%.

While some critics assert Tesla’s recent rally is too much of a good thing, there is evidence to suggest the upside is rooted in solid fundamentals.

“During the first half of 2020, Tesla’s market share of battery electric vehicles in China reached 21%, up from 6% for the year in 2019 and 2% in 2018,” said ARK analyst Sam Korus in a recent note. “It appears that concerns about Tesla’s ability to sell lower-end cars in China have been misplaced.”

Currently, electric vehicles represent a small percentage of new automobiles sold around the world and cars on the road, but that percentage is expected to increase in a big way over the next several years, but massive growth is coming for the industry. Increasing battery life and power is essential to converting more drivers to electric vehicles.

“On a global basis during the first half of the year through May, Tesla’s market share increased roughly 300 basis points from 23% on average in 2019 to 26%,” writes Korus. “While many investors used to ask what will happen to Tesla when traditional automakers start making and selling electric vehicles, ARK now wonders how high Tesla’s market share will go, a remarkable turn given that our base case assumption is in the opposite direction, 19%, for 2024.”

As Tesla (TSLA) stock surged to hit a new all-time high on Monday, increasing the stock’s record run, as investors have made CEO Elon Musk the seventh-richest person in the world, surpassing legendary investor Warren Buffett. Given the company’s outstanding performance, there is now broadening speculation that Tesla will soon join the ranks of the S&P 500.